It's Saturday, or as we like to call it in this house, "Svengoolie Night". Svengoolie is a really campy movie host out of Chicago that shows really campy (and sometimes classic) horror movies. His puns and corny jokes make you moan, but for some reason, it has become a tradition for us to watch him every Saturday night. I think it gives me warm fuzzies because it reminds me of being in college and watching bad Saturday night movies in the dorm lounge with a bunch of friends. Back then, the hosts were out of Cleveland. Big Chuck and Little John. Back East, we had Count Gore De Vol out of Washington D.C. I think that every city had a B movie host back in the day. Everyone remembers Elvira! Svengoolie is a hold-out from that era. 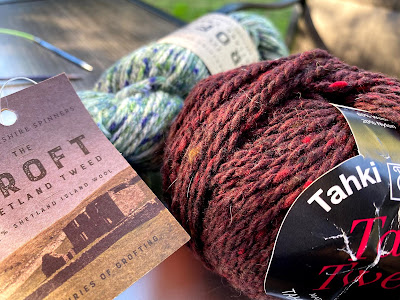 I had eight balls of this Tahki Tweed (now discontinued) in the stash in Aran weight. I had one skein of the lovely blue/green/white Shetland tweed that was given to me by a friend who went to Shetland Wool Week last year and brought it back for me. 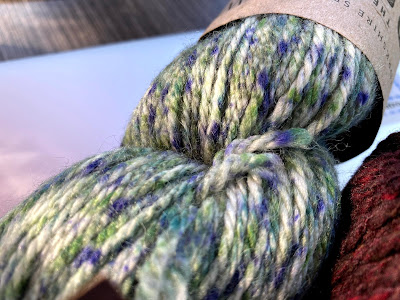 So, I put down the previous red yarn from two days ago, and I started this: 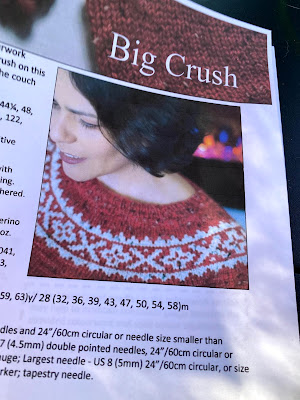 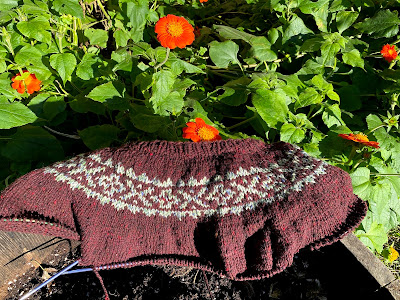 I'm hoping that it will grow when blocked. It seems a bit small. Oh yeah...I forgot to do a gauge swatch.  I was so excited about starting it, that I just jumped in. Duh. I will gift it to someone if it doesn't fit.

I almost forgot- Reggie had his one year birthday on Wednesday! He still acts like a knucklehead puppy, but he's now officially a big boy. He keeps us laughing and entertained. 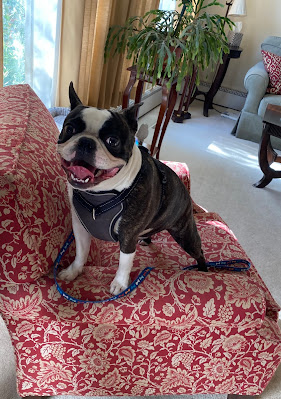 Hope you all have a good Saturday!
Posted by Minerva at 10:52 AM

Minerva
I am learning to accept that this adulthood thing isn't a passing fad. I'm in it for the long haul, so I may as well have fun. I started part of my life over about 5 years ago, and am quite happy with the end result. Creativity is my stress relief and my meditation. Isolation is not my thing. But we all have to adapt, so why not go through this journey together?